Calamity in Flint Sparks a Fire of Outrage

The calamity in Flint has sparked a fire of outrage, igniting intense examination of the disastrous consequences of anti-Unionism on middle class jobs, public infrastructure and quality of life.

This Michigan city has been in the news because its water system has been poisoned by lead leaching from old service pipes. Approximately 100,000 residents are affected.

Many thousands of infants and children have high levels of lead in their blood, putting them at risk of devastating mental and physical impairments. An outbreak of Legionnaire’s disease is also linked to the disaster.

It started in 2014, when Flint city officials, desperate to save a few million dollars, cancelled their contract with the city of Detroit for delivery of water. The idea was to get water from a new treatment plant near Lake Huron, but this facility isn’t scheduled to open until late this year. So, for the meantime, the city of Flint decided to draw its water from the nearby Flint River.

Unfortunately, the water in the Flint River has a higher acid content than the water from Detroit. This acid has been eating away at the old leaded service pipes leading to the homes of Flint’s residences, poisoning their occupants.

Blame is landing on state regulators who signed off on the plan and for several months disregarded warnings coming from Flint health authorities and the federal Environmental Protection Agency.

We’re just beginning to learn the extent of callous contempt held by Michigan Gov. Rick Snyder’s administration for Flint’s residents. Recently, we learned how the state failed to include a federally-required additive to prevent the leaching of lead into Flint’s water supply — putting children at risk to save a lousy $100 a day.

How did we get to this point in a city once at the center of America’s flourishing auto industry?

My grandmother organized the AC Delco spark plug plant in Flint in 1936, just about the time our Union, now known as UFCW 8-Golden State, was coming into existence in Sacramento.

This was the beginning of Flint’s heyday, when the city was a model for our nation’s economy with its strong middle class.

The United Auto Workers was a powerful force in local and state politics. As a result, the state of Michigan had good laws serving the interests of working people. It didn’t matter if the governor was a Republican or Democrat — this was a pro-Labor state.

Michigan has become a “right to work” state, which means Union power is diminished by crippling restrictions.

With its Unions weakened, Michigan’s laws to protect working families have been replaced with laws favoring the greed of rich and powerful corporations, under the flawed belief tax cuts and other favors for the wealthy will somehow “trickle down” to everyone else.

As we’ve learned again and again, tax cuts for the wealthy only make the wealthy wealthier while blowing holes in governments’ budgets. So these governments cut corners, with disastrous results like those we are seeing in Flint. 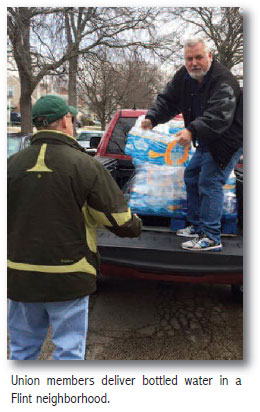 Here we observe what happens when Unions are not sufficiently involved in politics: decaying infrastructure, lack of environmental and health regulation, the decline of the middle class and a widening gap between rich and poor.

Meanwhile, America’s Unions, including the UFCW, are coming to the aid of Flint’s residents (see below). Leave it to the Unions to do the right thing!

Early in February, while addressing the UFCW International Union’s Advisory Board and Executive Board, I connected the calamity in Flint with the decline of middle class jobs and the devolving of Michigan into a “right to work” state.

I was gratified by the strong response and inspired to see such passion at the highest levels of leadership in our Union.

The people of our nation need to understand the significance of the tragic events in Flint, for they reveal the dangers awaiting us all if the attack on Unions is allowed to spread wider than it already has.

The fire sparked in Flint can be quenched only by the rising tide of a resurging Union movement.